December’s “Christmas tree” was a tough one for most 1000 Islanders.

This determined willow sits on a microscopic island (with only its trunk showing in high water) locally known as Toniata, the original name of Jones Creek and also of an Indian village located here (or nearby) when Father Simon Lemoyne, a French missionary became the first white man to visit the area early in the 17th century.

The island sits in the middle of a very pretty bay, visible from near the eastern end of the 1000 Islands Parkway but hard to spot from the River unless you make an effort to explore the intricacies of the Canadian shoreline.  The bay also provides access to the extensive Jones Creek wetland/wilderness area, which is now protected forever as part of the Thousand Islands Biosphere Reserve.

Surprisingly, there were quite a few correct responses, but the most interesting one came from Pam Lyon in Penfield, NY.  Pam related a story that I first heard from her father Jim Lloyd when I purchased their family cottage for use as a summer rental property and as our island’s shore base.  At the time, Jim told me a story that I have since frequently related, perhaps a little inaccurately.

So here’s Pam’s story, sewn together from several emails after conferring with her Dad:
“I can tell you that tree is at least fifty years old because I looked out at it every summer of my life until just recently when my parents sold their cottage at Jones Creek to the photographer!  As small children, my brothers and I used to 'picnic' on the shoal when the water was low and repeatedly get our lines caught in the branches when casting.  One year my grandfather even went so far as to prune the willow because it had been struck by lightning during a storm and had some branches that were dying -- It was ‘our tree’ and we needed to take care of it.
It has been the subject of many paintings by local artists and everyone who ever came to visit us took a picture of the little "island" in the middle of the mouth of the creek.  The tree grew from a tree root that floated down the creek and got snagged in the mire brought up from dredging.
The dredging was done by my grandfather after World War I because he believed strongly enough in a local legend to make a serious effort to recover a 'treasure’ that was supposed to have been dumped in the water here during the War of 1812.
The British Army was heading to Elizabethtown (now Brockville) and were being pursued by the Americans.  The gold the British army was carrying was slowing them down, so they were forced to dump it into the water.   I have no idea if this is exactly true nor am I sure how my grandfather and Wells Simpson got wind of this particular location but their dredging resulted in your little "tree island" and a fantastic picture.
Wells Simpson owned a sand supply and dredging business in Brockville and had several scows for delivering sand and for dredging purposes.  My grandfather worked for him during the summer for a while when he was a young man before he emigrated to the States.  Dad says that one of the scows sank in Molly's Gut and is still there.  (Ed. note – it is.) I also remember my grandfather showing us some arrowheads that he had found in the area.”

The River is full of such stories.  Thank you Pam for straightening me out on this one, although I think I can safely say that if there ever was a treasure, it is either no longer there, or extremely well concealed.  The children of many of our guests who have rented the cottage have spent countless hours scouring the bay in hopes of riches and when it comes to adventures like this, children can be pretty thorough.  No luck so far.  A great story however, and the hope is that these wallpaper images will dig up many more.

With that in mind, this month’s image is extremely unlikely to be identified:

I will say it’s not my island, but it would be a very clever islander who could identify it with so few clues even if it is their island.  And it might well be as I confess that I trespassed to capture the moment so the owners have no clue I was there to get it.  If you can’t identify it, don’t let that get in the way of a good story.  If this image brings one to mind, please share it and as with Pam Lyons, a set of six prints may soon be heading your way. 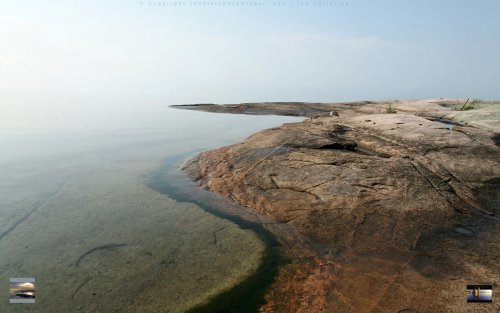