Last month’s scene was an incredibly difficult one and as I suspected, no one correctly identified it, despite the fact that several were convinced they knew exactly where it was. That’s precisely why I picked it. It is so very obviously the 1000 Islands that it could be almost any one of them, but no place else.

Why is it so immediately recognizable as here? I guess for the simple reason that most of the islands are the granite roots of ancient mountains that make up the Frontenac Arch and each has been carved and polished in much the same way by the glaciers of numerous ice ages.

I’ve often noted when exploring islands that each seems completely different with its own unique character, as is the view of the River from each, as though it's an entirely different place, yet in many ways they are all very similar. Don Ross’ book “St. Lawrence Islands National Park” describes a typical 1000 island. When I first read it, I was convinced he’d written it while sitting on mine, but the description applies to most of them.

As it happens, this one is Savage Island, one of a group of seven near the mouth of Jones Creek and roughly opposite Crossover Island Lighthouse. Out for a morning row in my skiff, I couldn’t resist landing and capturing the calm as the sun burned its way through the fog.

This month’s scene should be a little easier to locate. As usual, there’s a set of prints awaiting the person who shares the best brief story about the area.

Sunday morning you’ll have the opportunity to accompany naturalist Gerry Smith on a bald eagle field trip and if this is like winters past, I think you’ll be surprised to find how many choose the area as their winter home.  Like the individual islands, each season makes this seem like a very different place and during winter, it really is. 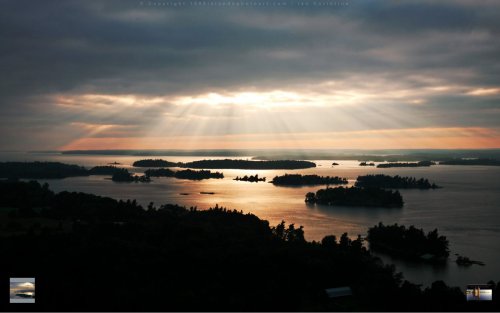 Beautiful pics, and the events sound great. Shame I can't be there.