Last month’s photo ID was a close run affair between Jason Stock of Glen Cove, NY and Shayne Sage of Charlotte, NC, with Shayne (just) taking the laurels (and six 8 x 10 prints) for this response:

“On a rainy day this past September, I went out in the early morning hours, with fog and rain, and headed to Chippewa Bay for some last chance Northern Pike casting. I left Swan Bay in the dark and actually followed a ship up the channel until just after the Deer Island group where I zipped ahead in the open waters to my destination, Cedar Island. For at least the first few hours of the morning I was practically the only vessel on the water, aside from the ship that finally passed. I cast along the channel side of Cedar Island and as I came to the top I observed a couple of islands across the bay that are the same Islands in your photograph this month. They are Oliver I, Bluff I and Lone Tree I. I trolled across to the islands, fishing along the way and I came up on "Bluff I". I remember admiring the building, which spans a tiny channel that splits the island. Its amazing, definitely a unique blend of nature and man made construction. I continued around the island and was fishing amongst the group, looking at these homes, all boarded up on these remote islands and I can remember thinking, what keeps people from messing with these properties? I mean, honestly, I was right there and could see someone with ill intentions landing on the island and no one would be the wiser, right? As I fished along daydreaming, I noticed another small boat in the distance sitting off a point. I thought I'm not the only nut out here today. The more I watched the more I noticed the vessel was actually idling along and heading straight for me. At the same moment I caught a Pike and my phone rang. It was my wife, tough decision, you know I answered the phone (and being a great fisherman, caught the Pike too). The fish was too small and was soon released. I was sharing the excitement with my wife and finishing our "good mornings" when I noticed the small craft was upon me. As it drew alongside I finally realized it was a NY State official boat and he was very interested in me and what I was up to. I hung up the phone and after a brief stop, safety & fishing license check, along with a good documenting of my vessel and location, he was off. Crazy I thought, I am the only boat out here, and in all the time I spend out on the River, rarely do I get checked on the open waters. In the end it answered that question that was running through my mind, those homeowners should be very content in knowing, someone is definitely watching! As always, thank you for all you do for the River!!

I should add a personal note that I first heard from Shayne earlier this summer, a few days after having fulfilled a random book order from North Carolina. A long and very moving email arrived, explaining a deep love for the River and a regret that life only allows only a brief visit each summer through an annual family fishing outing. It explained how much he was enjoying revisiting the River through the book’s photos when suddenly, Shayne found himself looking at himself! His last visit had been typically short and pure coincidence found me walking the Canadian Span, probably for the only time that summer, when one of those “magic moments” occurred that never can be planned or repeated. A trolling fishing boat monetarily silhouetted itself against a sparkling reflection that for an instant was pure magic. Then it was gone. To this day, it remains the best fishing picture I’ve ever taken, despite plenty of trying. It’s page 38 of Water, Wind and Sky and in the “Boats” Album on the web site, if you’re curious.

Speaking of the Albums, I’ve been posting a lot of images to the site that you will never have seen before. Scrolling under “Albums”, you’ll find many slideshows of “Neighborhoods”, including your own (or soon to), as well as themes, like Boats, Lighthouses, Wildlife, Castles and grand cottages. The Neighborhoods so far include The Admiralties, Alexandria Bay, Brockville, Cape Vincent, Clayton, Chippewa Bay, Grenadier, Grenell and Grindstone Islands, The Lake Fleet Group, TI Park, Wellesley East and Wolfe Island. More pictures will be added as I sort through the 20,000 plus images in my library and new Neighborhoods will be posted as time allows, until the entire region is there for you to explore and enjoy.

If you spot a friend's cottage or an image of interest to them, simply click on the email icon at the bottom left of the picture and it will send a link so they can see the picture. If any are important enough that you’d like a giclée print to frame for yourself or as a gift, simply click on the shopping cart icon to order it. I’ll do my best to get it printed and sent within a day of receiving the order, but remember the Canadian Post office is slow, so try to do it early if it’s for Christmas. Ditto with book orders.

I chose the December image with the thought that it might convey the thought “Peace on Earth”, while also serving as a slightly different take on a Christmas tree. Six 8 x 10 prints are on offer for sharing a brief story about the location.

Have a wonderful holiday season, 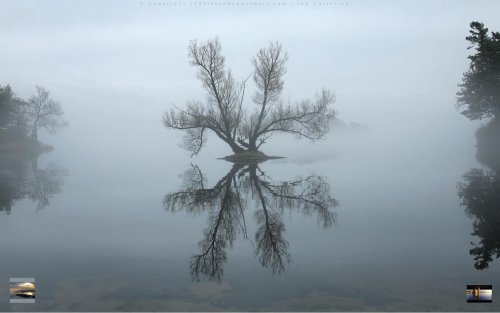