We ducked the Nor’easter that recently visited New England and aren’t generally subject to “lake effect” snow coming off Lake Ontario so don’t have much snow accumulation on the River, but it has been cold. Cold enough for the River to be frozen across in most places and even safe for me to walk out to the island for a recent visit.

Interestingly, the southwestern tip of the island and the island/rock we call “Hayley’s Island” which lies in front of it, were smothered deep in ice. The final freeze must have come on a very windy day because rather than running off, the spray froze in place, over and over with each wave, leaving behind a thick coating.

The island remains beautiful in winter, but it always seems to be an austere beauty, reminiscent of a scene from the classic movie “Doctor Zhivago,” which was set in a deep Russian winter. So with so much cold up here, I think it’s only appropriate to warm up by sharing a summer view from this perspective. If this scene brings to mind any stories you’d care to share, please take a moment to leave them below.

As spring approaches, perhaps it’s worth reminding you that we have two possible summer holiday rentals for you to consider. One is on the River, situated on the protected cove where Jones Creek (part of 1000 Islands National Park) meets the River. The other is very different, and arguably more charming, a tiny 500-year-old home in a medieval hamlet on the edge of Provence in the south of France.

Lastly, I have been hard at work on a couple of major projects that I'm pretty certain will be of interest. Both are coming along extremely well. More on them next month. 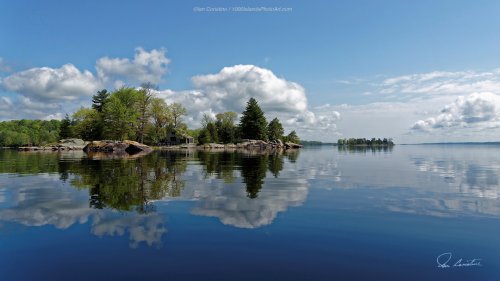 Feb 1 2015 Those shots are spectacular. It is a joy looking at them. Thank you.

Loved the two pictures in different times of the year. Both interesting and beautiful. I love to hear about the conditions of the river and things up there this time of year. Thanks, Ian.

Your picture and information about the ice build up at “Hayley’s Island” reminded me of a story – something which happened to me several years ago. While I was still working for the National Park, the river had opened up southeast of Mallorytown Landing in early March. We had tremendous winds for several days and by mid March one could see why Ice Island had received its name. Huge sheets of ice had been driven up the west shore and over the rock islet for about 1/3 of its length. I had been managing Ice Island in conjunction with the Canadian Wildlife Service to improve common tern nesting for many years, and had the approval to visit the island at any time from island owner Morris Huck of Rockport. With water open so early in the year, and with ice piled high, I couldn’t resist convincing another Park Warden to join me in an aluminum boat trip to investigate this ice phenomena. When we arrived I could not believe the amazing ice spectacle. Two foot thick layered sheets of ice, each the size of large living rooms were piled ten to twelve feet high. It was late in the day and the sun gave the layers a beautiful clear aqua appearance. I suggested my Warden partner stand in front of the towering layers of ice. I would take his picture and then he could take one of me – we knew we would never have this opportunity again. He got into place, I raised my camera and snapped the shot. Then, I heard that sickening sound of the rewinding film. This was long before carrying cell phones with built in camera capabilities. My partner ended up with a fantastic picture of himself standing in front of layers of aqua ice twelve feet above his head and I never got that great ice backdrop shot for me. Conditions were never quite the same to attempt a return visit.