I received only a few guesses attempting to identify January’s image and of them, only two were correct. Jim Pontious of Murrysville, PA was one, but the award and the six prints has to go to Steve Franzeim of Harvard, Mass. In the interests of full disclosure, I need to confess that Steve and his wife Chris are very dear old friends. “Beach buddies” actually. Part of a group of friends who re-converge each summer, “Big Chill” style at Goose Rocks Beach in Southern Maine, my childhood and favorite escape, at least before I discovered the Thousand Islands sixteen years ago.

I think even Jim would agree that Steve is deserving of this one because he’s never actually laid eyes on this spit of land, much less ever set foot on it. His experience in the tech industry no doubt helped as did Google Earth. Here is Steve’s response:

“This is the northern tip of the western end of Howe Island, east of Kingston, looking toward Treasure Island off St. Lawrence Avenue on Route 2. The photo was shot at sunset at the upstream end of the point beyond Spithead Road on Howe Island. This photo shows the extent to which Mr. Coristine will sacrifice in his quest for the perfect shot as this photo was shot during the “Louting hour.”

Steve’s final comment is a tongue in cheek reference to the fact that each afternoon in Maine, any and all constructive activity ceases so our group can converge on the beach to enjoy the sunset. Missing this important daily ritual by heading off in the plane to shoot photos would be strictly forbidden.

I think Steve’s correct ID illustrates the incredible power that is now available to us as this computer age progresses. The ability to build a web site and get these monthly blurbs out to a large audience instantly is already impressive, but imagine trying to explain to someone even a couple of years ago that you had intimately searched a little known and distant region to accurately identify a very specific spot without ever actually going there. What will we be doing in ten years? Or even five? Or next?

I’m hoping that this month’s offering will generate several interesting stories. A set of six prints awaits the best:

I should mention that this past month I've posted dozens of new images in several new 1000 Islands Albums that you might enjoy browsing including "Boathouses", "Cottages", "Flora", "Moods", "Ships", and under the sub-menu Neighborhoods, "Navy Islands".

As always, new additions like these are always listed at the very bottom of the Home page.  It is also worth remembering that if you come across a particular shot that might be of interest to a friend or family member, simply click on the small email icon at the bottom left of the frame which will email them the link to see it. 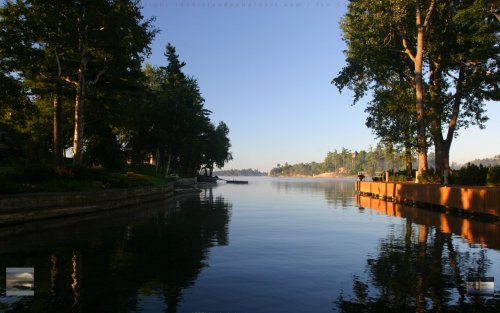 Some of the best photography I've seen in my life.Portrays where I'd rather be.Thanks Ian.