Many responses correctly identified last month’s scene, including this one from Dean Evans of LaFayette, NY:

“This is the channel between Nobby and Welcome Islands. The channel is a very serene escape for what awaits just a stone's throw to the south side of Nobby...the very turbulent American shipping channel directly in front of Alexandria Bay. The often misspelled Nobby Island (to the left as you look at this photo) is owned by Dr. A. John Merola. Welcome Island (to the right) is the former location of the Thousand Islands Yacht Club, and now has a private camp on it owned by the Magari family. In the distance one can see the romantic estate known as Hopewell Hall, formerly owned by George Boldt's granddaughter, and across from Hopewell Hall sits Castle Rest, the estate formerly owned by George Pullman, of Pullman train car fame and fortune, and once visited by President Grant. So there exists a lot of history, lore, romance, and wealth that now blends into the people of present day creating their own storied experiences in the area known as "Millionaire's Row".

Many thanks Dean. A set of 6 prints is on its way. I think it’s worth adding that while this area was the focal point of the lavish gilded era on the River in the late 1800s, where life was lived in a never-ending fairy tale, it did end for a considerable time, only now beginning a renaissance.

Most of the children who inherited these estates were in no position to support them after the onset of World War I with the taxation it introduced, followed by the depression and then World War II. Many outstanding properties were abandoned or far more tragically - destroyed, because of the unrelenting demand for property taxes despite the realities of the time - an incredibly shortsighted blunder that robbed the River of many of its treasures.

Author and ThousandIslandsLife.com editor Paul Malo shares this insight into the financial realities of the time:

“When I was a youngster, I tried to interest my parents in buying Welcome Island--not just the island, but the whole Thousand Islands Yacht Club facility, then intact. As I recall, at issue were back taxes of $700. But back in the Depression years and during World War II, many river properties were available for the taking, since owners weren't paying taxes or maintaining the properties.”

Arriving late is another interesting recollection from Tad Clark of Comfort Island:

"We were away most of February and I missed the opportunity to comment on this month. Even though it is after the fact, I want to make a few comments about the T. I. Yacht Club in particular. Dean Evans has done a good job of defining the location and general history but the TIYC is a sad story in and of itself. As archive pictures would suggest, the TIYC was a magnificent structure where the high and mighty used to congregate and partake in various social and recreational activities. My grandfather, Mancel Clark Sr, was at one time the Commodore in the 1920s. My father, Mancel Jr, recalled playing tennis on the tennis courts there, attending dances and being a participant in the season-long sailing competitions on a course in the Rockport area. There were at least six specially designed 14' sailboats with centerboard and wide beam for the sailing aspect of this club activity. There remains one surviving Thousand Island One Design sailboat, the "TI 1" belonging to my father, which resides in the Comfort Island boat house. In my teens (Mancel III), I used to sail this craft up and down the River marveling at the ability of this vessel to deal with tricky winds and the considerable current found in the "Millionaires Row" segment of the St. Lawrence Seaway."

For March I’ll leave you with this scene: 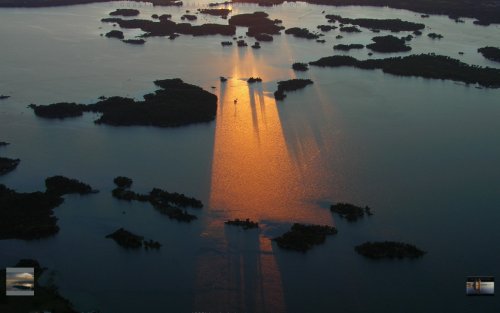 With April's wallpaper image we are adding the ability to add comments. Feel free to add whatever notes, comments or stories that you think others might enjoy relating to this month's posting.