Last month's photo of the Niagara drew a number of interesting responses including one from Kris Bregani who I'd like to thank for having told me the Niagara had run aground just across the channel from her cottage: 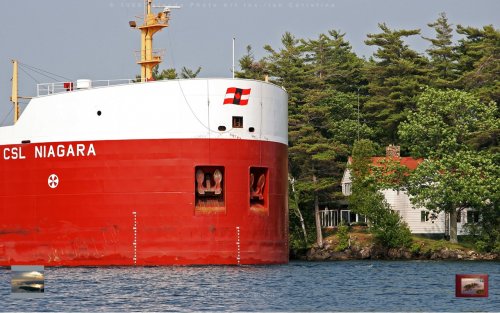 Despite several good answers, the set of three, Thousand Islands posters has to go to Brian Prince for this detailed explanation:

"This is a picture that was published in papers of CSL Niagara who lost steering and struck a shoal in the American Narrows near A-Bay and ran aground. This happened Tuesday June 28th, 2005 just before 1:00pm on St. Helena Island where she was taking on water. Any one home would have thought that the world was coming to an end when this happened. Imagine the surprised look on one's face when they opened their front door to find an immense 739' 10" by 78' beam, red & white monster! She was built in 1972 carrying up to 37,696 tons of coke at maximum mid-summer draft of 31' 04" (max 30,118 tons at Seaway draft of 30'6").

As luck was with everyone, especially the cottage owner and her un-injured 25 member crew, they managed to make temporary repairs to a 10" gash overnight (to the satisfaction of the Canadian & US specialists and the USCG), pumped her out and departed on their way at 4:07am the next day towards Lake Ontario.

Interestingly, this ship's stern section is from the CSL J. W. McGriffin ('72-'99) when they added a new fore section and bow in 1999. CSL Niagara was the first of Canada Steamship Line's new generation state-of-the-art self unloading bulk carriers when she was re-launched June 15th, 1999 from the Port Weller Dry Docks in St. Catherine's. This "SeawayMAX" class vessel was named after the Niagara peninsula and frontier, being the location of the Port Weller Dry Docks. She was the first of three vessels being rebuilt as part of a $100 million program starting in 1999. The other two were Rt. Hon. Paul Martin in 2000 (from the M. H. Griffith '73-'00) and CSL Laurentien in 2001 (from Louis R. Desmarais '77-'01). On her maiden voyage in 1999 she traveled from Port Weller ON, to Sandusky Ohio for a load of coal. She set a record Nov. 29, 1999 for the the largest load of grain (29,707 metric tons), traveling from Thunder Bay to Montreal, breaking a previous record set in 1980."

Many thanks Brian for the interesting details.

As this month's image is the last of the season and because you'll have all summer to think about where it might be, I thought I'd make it a tough one. I love shooting fog. It can make for wonderful. mystical scenes, but demands great respect when flying. Losing the horizon in a VFR airplane means you are about to have a very unhappy day. There are rewards however: It will be late fall when these images start your way again, however I will share some news with you in a few weeks. I've been working on a project all winter that I think you might enjoy and will tell you more when it's finally ready.

In the meantime, enjoy a wonderful summer on the river,