It would seem that many of you need to get out a little more to explore this summer. Only a few clever souls were able to identify this scene, but in truth, it is a tricky one. It is Crossover Island, famous for its historic lighthouse, but with it totally hidden behind the tree at the left end of the island, it’s little surprise so few identified it. Kudos to those who did, including my good neighbors, the Toltons.

“When I saw the February Wallpaper, I thought that I was looking out our front window with Crossover Island (Nine Mile Light) against the American shore. If you turn off the angle between the silos and Crossover it suggests that you were on very familiar ground (Raleigh Island) when you took the photo. Once in a while, when the fog (sea smoke?) is lying just on the surface of The River, we have a ghostly sight of a passing freighter with only the pilot house and the stack showing.

The silos replaced a large bank barn. One Sunday morning, many years ago, we watched as it was consumed by fire - the silos replaced it, one silo each year. A visiting friend from Philadelphia (an economist) looked out and saw a "Bar Chart", with the height of the silo indicating the success of the farmer each year. Everyone sees the Islands in a different way.

A couple of very quiet cold nights ago,The River froze like a mirror. The full moon provided a very eerie sight. We look forward to spring.

We do enjoy your great pictures and the anecdotes that accompany them. Thank you. Be well.”

At this moment in time, a little drama is playing out which I’ll share with you. I’m in the process of publishing a new book, the 5th of photography of the region and it will be the last and I hope, the very best of all.

Each of the others drew from more limited libraries of what I had captured initially or since the previous book. This will be the very best from all of the 15 years I’ve been photographing the River. Because it’s four years since the last book, I’ve managed to capture quite a few new images which have earned their way in on merit, not simply because they are new.

Half of the book’s images have never been published before. The other half “cherry picks” from the very best of a library that now exceeds 30,000 images. If this then is to be my last book of photography (that I mean it is borne out by the fact I’ve sold my plane), I want it to be the very best in every way, including physically. The exceptional quality of the Thousand Islands deserves it.

The best way I know to display an image is as a backlit transparency. That’s not possible in a book (yet - keep an eye on Apple's iPad), so I have turned to the next best way I know - applying extreme high gloss. Extreme gloss is sometimes used on quality book covers and occasionally on very high-end magazine covers for exactly this reason - to make them stand out. I've only ever seen it inside a book once, on three page spreads of an Aston Martin sales book. I guess when you're selling cars worth hundreds of thousands of dollars, you present them very well. But to my knowledge it has never been used throughout an entire book. That fact was confirmed while looking for a printer who could do it. It literally took a search around the globe.

That search was finally rewarded. I’ve looked at the tests and they are gorgeous, so now the book is in production, but all this took a lot more time than expected, putting the schedule way behind. It is nip and tuck if it will be here in time for two events which will serve as launch parties (or perhaps if necessary, previews) for Canada and the U.S. which I’m hoping you’ll attend.

I’ll share more details as the events get closer, but for now I’ll mention the dates, (both evenings) - June 4th at the Brockville Arts Centre and June 26th at the Clayton Opera House. These are going to be very special celebrations of the Thousand Islands through pictures and music. I am honored that both will include a live concert by the internationally acclaimed band Great Lake Swimmers who have developed a strong connection to our region and are telling the world about it. Just Google Great Lake Swimmers and either spelling of 1000 Islands to understand.

If you’re going to be in the area at that time, I hope you'll put one or the other on your calendar now. Tickets for Brockville's event are available by RSVP only from the Tall Ships Landing waterfront condominium project (TallShips@Fuller.ca), the evening's presenters. Tickets for Clayton which will be the feature event of Clayton's River Festival are available from the Clayton Opera House.

Here’s your March wallpaper image. I’m hoping you’ll have some great stories to share. As with February's I'll have a set of 6 prints ready for the winner with the best story. 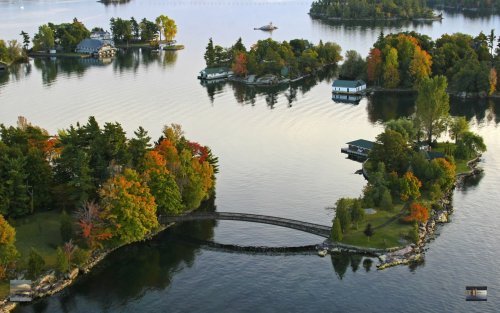 When you get out of Jefferson County, it get tougher for me. I think this is the small shoal SSW of Crossover Island light. I recognize the silos along Rte. 12 on the American shore. My only recollection of a story in this area is from several years ago when a freighter fetched up on Whaleback Shoal as it was beginning to cross over from the Blind Bay area. Great Photo; keep them coming!

This one didn't take too long to recognize since it is directly out the front window. Looks like a cool, quiet morning where mankind sips coffee from shore and ducks enjoy the water surface solitude. I have no riveting story to share about this south facing view of Crossover Island however I would like to point out that you have other photos that showcase the neat old light house located here. Crossover is an interesting section of river since the shipping traffic does indeed cross from one side to the other but it is also where they change reporting jurisdictions. The ships radio in when they arrive at Crossover to confirm they are departing one jurisdiction and entering another. When they do this you can learn where they are bound, draughts - fore and aft and sometimes the cargo. As a side note we have always speculated that the silos of the dairy farm on the US shore were a financial bar graph for the first eight years of operation.I use your photos as computer wall paper at work all the time. My colleagues have noticed and are now taking an interest in the river even though they have never had the pleasure of spending time in, on or around it. Thanks Ian!

This is a nice Northern view of Crossover Island! This shot is from the Canadian side of the island and out of the main shipping channel. The bushy tree at the foot of the island conveniently shrouds the view of the lighthouse. The fog confuses the viewer as it erases the silver roof volumes that would identify this little island’s silhouette. The real giveaway for me are the silos perched on the US shore beyond. I remember those from the foggy mornings of bass fishing between Crossover and Whaleback shoals, those big vertical cans always popped out of the fog first!The one fishing trip I remember quite well, I was twelve years old and with my Dad. We caught our legal limit in record time. We filled the big metal mesh purse draped over the side of the Hutchinson with fat black bass. We were so excited to go back home and show off our catch that somehow we forgot to bring the full purse back into the boat.This type of metal purse had a hinged door on the bottom that was kept closed with a spring. The small spring was no match for the force of the quick flow of river water through the mesh as the Chrysler Crown engine roared the boat to plane off. I peered over the gunnel in time to see the bass fire like torpedoes through the opening on the bottom of the purse back to freedom. Today anglers commonly call this type of fishing “catch and release” and it is considered quite fashionable. However, this was a different time and that foggy morning I learned many different names for this type of fishing.

Can't wait for your new book!!! Sorry to learn it will be your last.

I wish I had gotten this as a regular monthly email. My wife and I immediately noted that it was Crossover Island. The blue silos in the background along Route 12 give it away. To the right of the silos is an old rundown red barn and stone house owned by, I believe, John Fitton's grandchildren. John, and his brother Harold, went to elementary school 100+ years ago with my grandfather. John owned much of the land in that area. Well, anyway, John and my grandfather went many years without ever seeing each other again until my grandfather was in his 50s, retiring from New Process Gear in Syracuse, and looking for some river property and, voila, they re-met. John sold my grandfather and grandmother our family lot inside Chippewa Point, and directly in from Dark Island, along Fitton Road. This was around 1956. John and Harold died in the early 1980s, John's wife Myrtle having died a few years earlier. John's daughter Marie inheritied their property, but she, too, is now deceased. John and Harold are buried in the cemetary on Pleasant Valley Road just south along Rt 12. Thanks for some scenery up along the northern portion of The 1000 Islands. Everyone tends to forget it exists.I see you flying your airplane occasionally. Perhaps some day we'll meet. I'm a CFI and ATP living in North Carolina. My wife and I own a home on the water in Thousand Island Park.

This is absolutely beautiful!! I have never had the opportunity as yet to visit this beautiful place, therefore when I see these beautiful pictures, it makes me more and more to want to go very soon!! Thank you so much for the awesome e-mails, they are such a joy!

Thanks Ian. Another beautiful shot of a beautiful part of the world.

This is the best one yet!!

How do you spell beautiful? This is just amazing Ian.