Okay, that’s about enough of winter. While there have been a couple of thaws along the way, this has been one of those old-fashioned cold ones. Cold enough to freeze the River across its width in many places, reportedly even in the US Narrows, which is unusual. The good news is that this should reduce evaporation and lake effect which can only help with water levels.

Thanks to Peter Grevelding, Dave Fownes and Steve Jarvis who all correctly identified last month’s scene as Jones Creek, taken a couple of days after one of two ice storms this winter has brought us. For those who don’t know it, the 1000 Islands National Park has opened an extensive system of trails here that will let you explore this exquisite nature preserve, year round.

Access has not yet been widely discovered, but near the eastern end of the Parkway, look for a small parking area on the north side, opposite Browns Bay Provincial Park. If it’s summer, you can cross the street after your walk for a refreshing swim at Browns Bay, which offers the finest beach along the Canadian side.

So, after a couple of months of winter scenes, it’s time to start dreaming about summer, particularly because spring is less than seven weeks away. In deference to the realities of the season, I’ll stick with a white theme, but introduce a little more green.

There are a few magical spots on the River that really say “Thousand Islands” to me, visually. Places I have returned to shoot repeatedly in an attempt to capture a few of the countless moods the River gifts us, if we’re paying attention. This is one of those places. It has been my desktop picture since I took it.

If you know where this is, please share the location and/or any comments or stories this scene brings to mind. 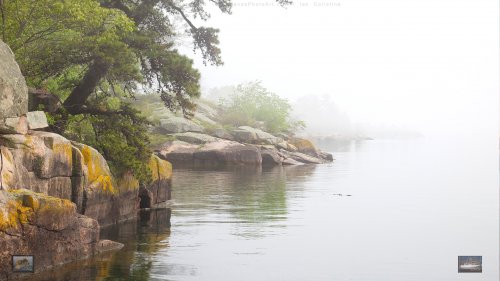 This is a long shot....but it reminds me of an island on the south side of the Brockville Narrows and the sloping rock where we would enter the water to dive a shipwreck schooner named Lillie Parsons ..maybe?... Been a long time since I've been up there and this probably just jogged a memory.......

Thank you so very much. What a wonderful shot. So tranquil.

I have to agree with Tom that this is Sparrow Island looking west up the channel, if there wasn't any fog we could see Battersby I. and de Rottenburg off in the distance. Sometimes a good fishing spot right here, some monster small mouth at the far corner of the island. Our cottage is just across the channel on the Canadian side on McDonald Point. John S. do you agree??

Good Morning Ian, I want to say that is your neighbouring Island to the west of you, Princess? On the north side looking west.

What a serene shot of pine and granite shores...I'd bet my tiara on Princess Island!

Can't say where this photo was taken, but I recognize that you have shown this location before.

This is definitely one of my favorites I can smell the air and the river!! Great job as always, Ian!

This almost looks like the upstream end of Needle Island but the foreground doesn't seem right.

Wonderful image, Ian. The rock formation looks a lot like what we called The Point located on the NW side of Murray Isle. I'm being PC here. Actually Murray was populated mostly by folks from NY and they called our side the back side of Murray. Sorry about that. :)

Great photos, awesome website for those of us who have a love of the Islands!

Been a River friend 60 years

What a beautiful shot! I love every color of lichen. Absolutely stunning.

I agree with some of the others -- looks like what I remember of Princess (Brown) Island to me! Is the artist's studio still there?

I have a hunch that this shoreline is Cleopatra Island. Canadian waters, near Zavikon Island and Mary Island State Park.

Thought maybe you were testing Jack here on this one, Ian. You had snuck up-river and snapped one of our lichen covered granite ledges sloping down easily into the river as it/they do at so many lovely locations river wide, but I cannot identify it. So if it's up-river ... kudos, Ian, KUDOS. But I think not. More likely it's near you. I had at first thought the gap between Ramsden Island and Wyoming (on Canadian upriver side of Ramsden) but the trees don't match. LOVE the orange lichens. Lichens as many likely know will not survive pollution. There are none in NYC, for instance. C'mon lichens! Wahoo! Jack

I don't know where this beautiful spot is but I only wish I was drifting by it now. Thanks so much for these beautiful reminders of where we all hope to return after we try to enjoy another winter.

Another gorgeous photo precipitates a flood of delightful brain chemicals. I'm not sure I have this right either. It does appear as if looking up river in the Brockville Narrows. The largest certainly similar to the one used to exit the water after jumping from the cliff for channel marker on Stovin Island. However, I'm not sure the tree leaning over the water looks right. Great to look out the window and see the river completely frozen over and then looked back at my desktop at this wonderful image.