Again last month I shared a scene that I expected no one to identify. Again I was wrong.

I’ll let Phil “The Forecaster” Chadwick take it from here:

"I know these islands because I have canoed and painted them "en plein air" since I was a kid in the 1960's: http://philtheforecaster.com

The river has always been home and memories abound. The one that really sticks out in my mind is a calm summer day on the flats east of Mallorytown Landing from the mid 1960's. My brother Jim and I were fishing from a wooden rowboat when a fish as long as the oar finned slowly into the shadow of the boat. It was the biggest fish we had ever seen. It stayed in the shadow for what seemed like minutes and then darted toward Chimney Island. We casted after it - excited that it might take the lure and terrified that it would. I desperately hope that muskies of that size still survive in the St Lawrence.

Since then, I have grown (maybe too much and too fast) but continue to canoe the river... more so in the last couple of years. As an artist, I share Ian's passion for the beauty and majesty of the river. As a meteorologist, I have an analytical side that analyzes the science of the scene.

As an illustration applied to Ian's screensaver, the flagged pines indicate that the prevailing wind must be from the right to left. The prevailing wind in the St Lawrence is southwesterly so Ian had to be looking southeast across the river. The developing cumulus clouds on the far shore are also tilted to the left. Since the sky is clear except for the daytime heating cloud, the wind had to be from the west which aligns well with the earlier analysis. The trees on the far shore are also in shadow with the mid to late morning sun. All three clues confirm that Ian was looking toward the US shore.

There are a thousand islands like this but maybe I also recognized the loon family in the image (humour intended). I saw the loon parents repeatedly when I was painting in the area this past spring. The current is strong enough to make it difficult to paint from the canoe. As a result I painted the western tip of "Green A Island" from the east end of Savage Island (with permission). The west end of Savage Island is Ian's scene and one I might get to on a calm day with an anchor. I recognized it immediately from Ian's photo. That day I painted a plein air sketch while accompanied by a flock of friendly tree swallows. You can view it here:

Memories like these, both old and new, are precious. I didn't have much but I had all that I needed."

Well done Phil. A set of TI prints is on the way.

Let’s see if any of you can tell us an interesting story about this scene. A set of prints awaits the best: 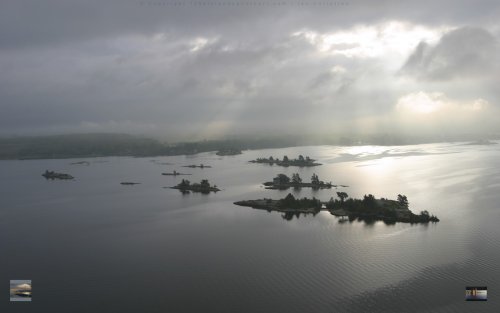 Here's my guess. The pines tend to lean toward the East, so this would have the photographer looking South toward the American shore. I think that the two loons with their chick spent the last two summers nesting on Green Island, so I would place the photo at the lower end of Raleigh Island.

Love your work & very thankful that I discovered your site. Would this picture be off of the east end of Hill Island with Club Island in the background? I've watched a set of loons off my porch this summer & noticed a wee one with them one time or two. I love their call! Looking forward to April.....We closed our cottage October 15th & we miss it already. We are planning a trip up over New Years, staying at the Gan Inn & walking to the cottage from the Hill Island Tower. Last year there was a foot & a half of snow.... making it a LONG walk, hopefully it won't be quite as brutal this year!

This looks like some place I ought to be.....not sure where it is but it brings a calm to an otherwise hectic day. Thanks so much for sharing!

Seems like the west end of Leek (Thwartway) looking south to Grindstone. I was born in Ivy Lea (have the passport to prove it) in 1944 and spent a great deal of my adult life aboard several cruising sailboats idling life away among the islands. Spent many hours picking my way through the shoals (forty acres) at idle with a bow lookout approaching the beach at Leek from other than the straight in approach. There used to be the remnants of a diving board anchored to these rocks used by those recovering at the hospital (that is of course if this is the place - so much looks alike!)

I don't have a clue where the photo was taken, but I'm very glad that Molly is OK!!! The first few paragraphs....I wasn't sure what the outcome of the dog would be, and was so happy that she survived!!

I'm not convinced I'm correct with the first photo, but my guess is the point pictured is the tip of Cleopatra Island. The second photo (with the loons) might be between Deer Island and Wellsley Island, off the tip of Fairyland Island. (I think the island might be called Pike Island.) The land in the background is Wellsley at Mary Island State Park.

The shore line in the background looks like the South East end of artists hide away. I have to confess canoeing out to your island with my wife to enjoy a river sun set. Those Adirondack chairs are better then any $23.00 theater seat with the built in cup holder. As it was her first time in a canoe, being from the prairies, she still remembers it fondly. Ian, it is still a pleasure to pick up my copy of your book to remind me of my home away from home. I sure do miss the river out here in Alberta.

Hi from Florida, The December wallpaper appears to be looking toward the village of Chippewa with Bluff Island in the forground. We are new to the river, but just this year fished many evenings in the waters behind Bluff from here. There is a little cut between the two separate island with the house extending over the cut. We took our kayak through there when the water was high this last spring. Our cottage is on the right behind Chippewa point.We look forward to your info about the area and especially the Fernbank webcam.Thanks, Mike and Sandy Harris

I think the front three islands are Bluff, Lone Tree and Elm Islands followed by Snakeoil and Willy Island taken from the direction of Superior Shoal. Check out our new boat at Its not quite a Bimmer but close.They are usually a blur when we go by. Thanks for the great photos...

This looks like an area I have fished many times looking south east into Chippewa Bay. I have spent many summers on Butts Island and would "slip" across the border to fish this area many times on long day trips with friends.

We all recognize that a great continental glacier once advanced over our beloved 1000 Islands region, but we may not all agree how the islands were scoured, carved, polished, and aligned. The islands depicted in the December Wallpaper are a glaciated grouping in the Chippewa Bay area. I once debated the reason for the general northeast to southwest alignment of most of the islands, such as those depicted in Ian's photo, with the late and great 1000 Islander, Paul Malo. Whereas I felt the alignment was due to the directional movement of the ice, Paul, along with fellow 1000 Islands author Don Ross, argued that an existing alignment of the former mountain chain could have been responsible for the path the ice followed as it ground, gouged, scoured and polished ever so slowly along. Regardless of how the path was chosen by the advancing ice and how the islands were shaped, all agree the ice was at least a kilometre thick over the landscape and retreated such a relatively short time ago (some 12,500 years ago). I think we would all be absolutely shocked at the first glimpse of the exposed smooth domes of rock and mud when the glacier began its retreat. The uncovered dome of granite just outside the OLG 1000 Islands Casino in Gananoque is a true example of how smoothly polished the hidden granite really is where it has not be exposed to thousands of years of weathering. Time in the 1000 Islands would fill in the advancement of diverse vegetation and wildlife, much of which we still enjoy today. For this small collection of Chippewa Bay islands however, low profile and limited soil would limit the amount of vegetative cover. The result would be one of Ian's favourite photogenic island groupings.

Given the size of the fish Phil The Forecaster describes, could it have been a sturgeon, long gone by this time, but still around then according to a few people.